Finn's Fabels: The Break In 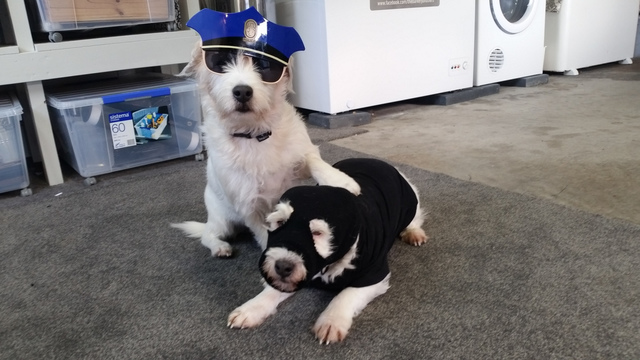 I know, before you start, it has been ages since I have posted anything. The story is that we have so busy with the hooman going back to work, we have had to hold the fort, and there has been a lot of sun worshipping that has had to happen.

I cant even begin to tell you how hard it has been lying on the back of the couch in the sun, day after day after day.

We had a break in at the head office last week.

The hooman unlocked the garage door to go to work and there was some woofer in there. Friendly chap, bit on the big size but what he had done was unforgivable. He had eaten MY biscuits!!

ok, well they were not exactly mine but I usually get to pick over the left overs from any markets to see what I want to have for the week, and this was the stock for the market the next day.

I mean, how rude. You don’t go visiting and eat their food, I was always taught to take treats with you.

It’s gone viral. All over news hub and the hooman got an email that iheartdogs picked up the story too. We are famous,  ok maybe not us exactly…

Anyway, the hooman got such a fright that she promoted Bertie from Intern to Head of Security and had him running around sorting out a new security camera incase it happens again. I know it was a good choice since he freaks out when the timer on the oven goes off (going to set it randomly one day, you know, keep him on his toes) but I was enjoying having an intern to do all the meaningless tasks around the place.

So, big shot Bertie with his new job title was getting a little big for his boots. Running around threatening to beat us up, throwing what little weight he had around. I trotted into the lounge and found that he had pinned Archie to the ground, although I think Archie was letting him.

I decided it was time to test out his security system. The hooman bought me some socks to make a balaclava out of and a black t shirt to cover my well known white hair, you know, to be inconspicuous. Little did I know that Archie had let Bertie in on it and by golly the police woofer turned up fast.

It was all a but of fun, the hooman even let us try out the new lamb and mint flavoured biscuits as a reward, and we learnt a very valuable lesson: the camera does work.